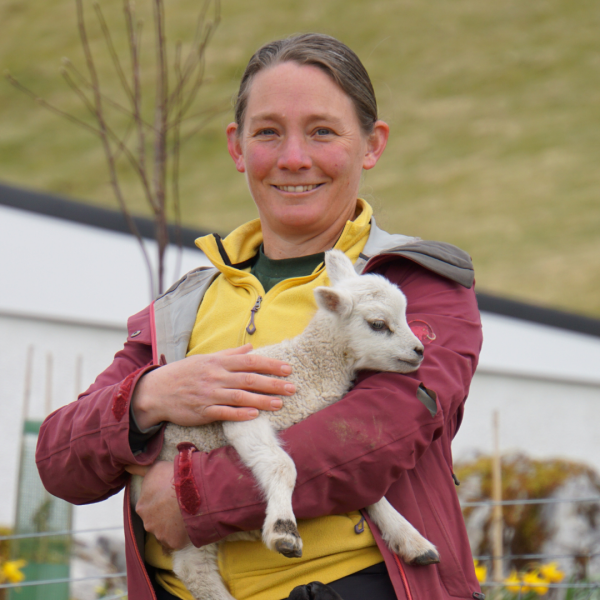 SHEEP, DIVERSIFIED ENTERPRISES, NORTH WEST SUTHERLAND. Helen has three crofts (like a very small hill farm with a unique legally defined form of tenure) in Elphin, totalling just under 3ha of inbye fields (fields for her exclusive use) and shares in the common grazings (a mostly unfenced area of c.1500ha on which she can graze 170 sheep, shared with about eight other crofters’ sheep and cattle).

Her route into farming started in Australia, where her parents had a 2.5ha hobby farm with sheep, chickens, fruit and vegetables. She always wanted to keep animals again, and when she moved to Scotland in 2016 she recognised the potential to do this on a commercial basis, in crofting. Her mother sold up in Australia and the pair bought the crofts with a Tearoom thrown in to provide a source of income and customer base for the croft produce.

Helen has about 100 sheep, mostly Shetlands and a few Soays with one Beltex terminal sire (to produce commercial lambs for meat). She sells the crossbreds at the local market as store lambs for other farmers to grow on, but finishes the pure Shetlands at two years old to sell the meat directly to local customers. She also sells the Shetland wool, either directly to crafters and spinners, or after having been spun into yarn by a small mill in Cornwall.

Helen has some chickens, mainly for eggs which are sold locally and to the café for baking, and has planted a small orchard (apples, plums and cherries), plus a range of other soft fruit. She keeps a small vegetable garden and has recently got a large polytunnel. While she is still learning a lot about growing in NW Scotland, the intention is to sell produce locally as well as using it in the Tearooms wherever possible.

The ground is quite poor and the upland climate makes it a difficult area to farm productively. Helen has therefore adopted a low input – low output system, choosing a small hardy native sheep breed that requires minimal feed and is self-sufficient at lambing time, but sells for a lower price. By selling the meat, wool and yarn directly she is adding value to each animal. She’s also trying to improve the land by planting trees to provide shelter and additional food for the sheep, as well as improved habitats for wildlife.

It's not easy and Helen struggles with the uncertainty of whether she’s doing the right thing. “It’s so tough to produce anything up here, should we just let it all go to tourist accommodation, ‘wild’ the land and leave the farming to the good lowland ground? Are the vegans and extreme environmentalists right and we should stop all animal agriculture and eat lab-produced protein? Should I, as an incomer, not be rocking the boat and just stick to producing store lambs for the market?"

“There is so much debate, so many conflicting opinions and, in some cases, so little good information. We have to balance so many things – environment, carbon, biodiversity, animal welfare, the efficiency of production, food quality, price/cost, community and our own mental health and quality of life.”

That said, Helen loves the connection with the land and animals, and the fact that she’s producing something real, valuable and meaningful from them. “I’m always learning, and there is such a sense of pride and achievement when you can see positive changes.” She also really enjoys the community part of crofting, working with other people and being part of something bigger.

The ruminant versus environment debate is a big issue, but there is very little differentiation made between intensive animal agriculture and extensive, low input farming, says Helen. Animals are needed to manage the upland habitat, which is not suitable for growing other food. And then there are the environmental, health and welfare issues: She feels that extensively grazed lamb must be better than intensively produced and grain-fed pork and chicken.

“The plant-based diet ideal shifts a lot of the environmental impacts of our food offshore and ignores the science around trying to run plant-only agriculture without any animals in the system. We’d end up with ‘wildland parks’ and agricultural deserts.”

Lab grown meat isn’t the answer either, feels Helen. “Besides the waste in not using perfectly good meat that grows as a part of our natural habitats, the food we eat is more than just the nutrients that we need to survive. I think real food is important. It provides a connection with our land and our environment. It is part of our history, our culture, our social interactions, our family life. I think many people in the UK have lost a lot of this connection, and that has a negative impact on their physical and mental health. Food is important to us as people, and as more than a lab produced, engineered pill to keep us alive.”

Helen runs the adjacent Elphin Tearooms in partnership with a neighbour (her mother stepped down from the role in 2022), and in 2019 she opened a small farm shop within the Tearooms with another neighbour, Tessa, selling Elphin-grown pork, beef, mutton, eggs and vegetables.

In 2020 Helen and Tessa started an online food hub (The Green Bowl, on the Open Food Network), selling and delivering local meat, eggs, vegetables, bread and other bakery products to surrounding villages. The business is growing steadily and she hopes to have more people selling their produce through the hub in future.

Member of the Scottish Crofting Federation, Clerk of the Common Grazings Committee, Trustee of the Highland Good Food Partnership.

Interview on BBC Alba, An Là daily news program about the Young Crofter award, along with a number of other publications including Northern Times, Herald Scotland, Press and Journal and The Scottish Farmer. Helen also appeared on Landward on the BBC, and featured in a food and drink profile in The Scotsman, has been interviewed by Country Life magazine and on Out of Doors on the BBC. Helen was an NFFN case study for COP26 “Rethink Farming” campaign, and a case study for Crofting National Development Plan, she also featured on the Canadian Centre of Rural Creativity, podcast on social enterprises, and was a speaker at post-graduate training event on Ecology and Land Reform at The Shieling Project.