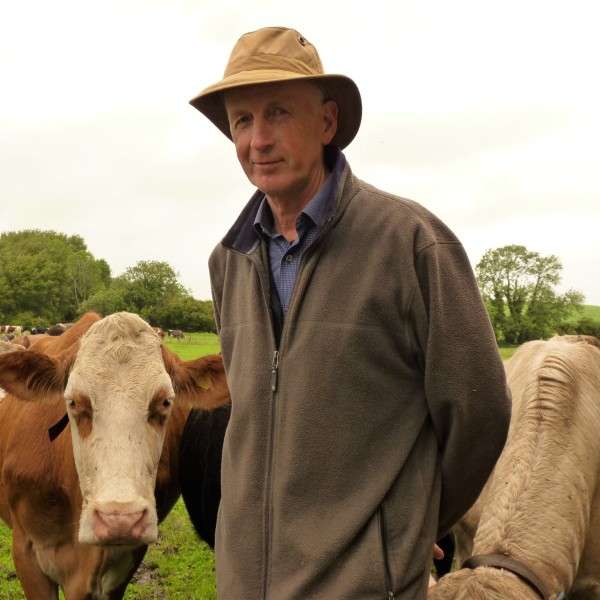 The whole herd is milked with two robots, which means each cow chooses when she wants to be milked, and how often. During the summer months, a cow will walk in from the fields and queue up in the shed, where the robots are located, waiting to be milked - some only once a day, others up to four times a day depending on how much milk she is producing. She is fed at the same time (a mixture of rolled wheat/oats and beans). If she returns too soon the robot will automatically open the exit gate, no food is released, and she is sent on her way. She will have to come back later. The cows are housed over the winter but continue to use the robots as normal.

Peter transitioned to robotic milking from a traditional parlour system in 2009. He believes it is better for the farmer and the cows, being less labour-intensive, freeing up more time for other jobs on the farm and allowing the cows to think for themselves. He says an independent cow is better off, and even cleverer, than an “institutionalised” cow, which is used to being herded two or three times a day.

It is a ‘closed herd’ meaning he breeds all replacement heifers, which will eventually join the milking herd. He keeps all the male calves and surplus females until they are about two years old. They will then be sold as store cattle, to be fattened and sold for beef from other farms.

Peter has diversified into lots of other things. He farms around 296 acres (120 hectares) of arable land, growing oats sold for human consumption, beans used as a protein source for animals on the farm and wheat mostly sold as animal feed. He has 45 acres (18 hectares) of woodland which is used for recreational bb gun shooting or, as Peter puts it: “People who run around shooting each other with bb guns.”

He has 39 acres (16 hectares) of wildflower meadows, 45 acres (18 hectares) of solar panels and 198 acres (80 hectares) of pastureland. There is a scramble track and a model aircraft club flies from one of his fields. He rents out office, workshop and storage space and his son and daughter-in-law run a wedding business.

Peter's daughter is now taking an active interest in how the farm runs, she also works part-time as an architect and is currently working to convert a barn under Class Q permitted development.

Peter enjoys ballroom dancing, spending time with his grandchildren and following politics. He is also very active in his local community, he is a former chair of the Parish Council and used to help run the village hall.

Since joining Just Farmers, Peter has gone from NFU member to Chariman of the NFU Swindon branch, and is a past office holder (formerly Wiltshire County Chairman). Trustee of the Central Region Farmers Trust. Former chairman of Clyffe Pypard Parish Council.

Appeared on BBC News and BBC Countryfile talking about Bovine TB (about 15 years ago). BBC Radio Wiltshire (taking part in a Brexit discussion). Since Joining Just Farmers, Peter has appeared on Farming Today, and was also approached by Defra (Department for Environment, Food and Rural Affairs) to write a diary for them and take part in a few focus groups. He's also done interviews with two foreign newspapers and lengthy interview with the Deputy Editor of Vegan Review.