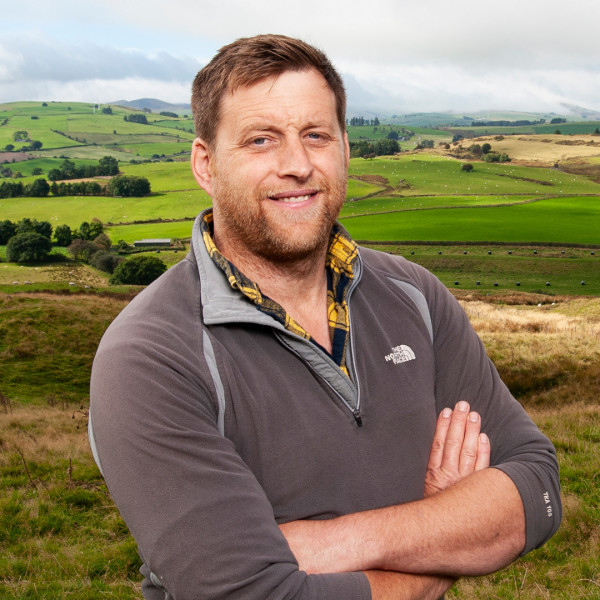 MIXED, NORTH WEST WALES: Llyr runs a 1,000 acre (404ha) predominately hill farm along with another rented farm on the Welsh/English border, on which he grows arable crops and winter feed for his sheep. He runs 500 Welsh Mule ewes (adult female sheep) producing lambs for Dunbia (an abattoir and meat processing firm), all fattened from grass, and 900 Welsh Mountain ewes as replacements (to breed future ewes from).

He works closely with the Royal Society for the Protection of Birds (RSPB) and Natural Resources Wales (NRW) to create habitats on the heather mountain which favour black grouse.

He also rears 250 calves a year which he sells as 12-month-old dairy replacement to dairy farmers as breeding stock.

Llyr also owns a 32,000-hen free-range egg unit, selling eggs to Tesco through Anglia Eggs. Using state of the art technology and renewable energy Llyr produces 10.5 Million eggs a year but has reduced ammonia emissions by 90% by drying the muck and cleaning the air coming out of the shed. Llyr also use ground source heat pumps to keep the hens warm thus hens eat 3g of feed less per hen per day. This is a saving of around 2 lorry loads of feed per year.  In the egg unit Llyr has put in a small visitor centre to help show the general public how free range eggs are produced with over 5000 visitors a year from schools to tourists driving off the road.

In addition, he co-owns Blodyn Aur, meaning ‘Golden Flower’, a Welsh cold-pressed rapeseed oil company which sells direct to Sainsbury’s, Morrison’s and Asda, as well as supplying Welsh farm shops, delicatessens and health shops – sales total about 6,000 bottles a month. The by-product from the rapeseed oil is a high protein pellet, which he feeds to the cattle or sells to local farmers.

Llyr also owns 50% of an equine veterinary practice site, which is rented to his wife, and her business partner, who specialise in equine reproduction in Saudi Arabia and the UK.

In 2006, he set up a small business called MALAC with other local farmers to help comply with the new fallen stock rules which apply to animals which die on farm. They purchased an incinerator and charged farmers a nominal fee to dispose of their fallen stock. Due to the high price of fossil fuels, he began looking for an alternative solution and found a company using fallen stock in an anaerobic digester.

Now MALAC produces green electricity in this way. It has helped more than 100 farmers and has reduced carbon footprint by 3,100 tonnes a year.

Llyr’s aim is to run a sustainable farm business. All the electricity used on the farm is produced by a hydro power plant which he built in August 2012 - it produces enough green energy to run 30 houses a day

As the stream dries up in the summer months, he then produces energy from 24kw of solar panels. The hen unit is warmed in the winter by a 60kw ground source heat pump.

Llyr attended Llysfasi Agricultural College and took over the running of the farm aged 23 when his father sadly died. “We had 1,800 ewes and no other income except for farm subsidies - I was worried by how vulnerable the business was. I started to change this by introducing cattle but over the years added new projects to take advantage of what the farm has to offer,” he says.

He enjoys the variety of work and is proud to see his produce being sold, whether in the supermarket, at a food fair, through a livestock market or when the lorry comes to pick up the eggs.

Llyr also started a charity with a friend called Cam Wrth Gam (Step by Step). They take volunteers to Africa to build schools, orphanages, kitchens, boreholes, and toilets. They have helped more than 1,000 people get access to fresh drinking water, 400 children to have an education and 600 children to have a clean cooking area for their lunch. They have raised £38,000 in total, which has enabled this work, and taken more than 60 volunteers from the UK.

Llyr believes that the relationship between farmers and consumers has widened and thinks it’s important that British farmers are able to communicate to customers how they produce good quality food, manage the environment, and form an integral part of the rural community and economy. He enjoys bringing up his two young children in a rural, farming environment.

With the increasing popularity and profile of plant-based diets, Llyr, like many livestock farmers, feels some messages are unfair or inaccurate. “I have been criticised on Twitter by vegans,” he says, “and I believe that we should not be afraid to try to educate people. I don’t expect to change their beliefs, but I would like their beliefs to be based on facts not propaganda.”

Member of the NFU and the NFU Next Generation team.

Llyr wrote for the Denbighshire Free Press from 2010 to 2013 about his farm work. He has featured on S4C Ffermio, BBC Radio Cymru, and in 2017 he hosted a family for The Family Farm programme on BBC Two. He has had a live broadcast from his kitchen for the S4C Heno programme (similar to The One Show) and set up a webcam streaming the hill environment in which his lambs are reared - this was broadcast to the meat counters in Danish supermarket chains from June to September 2017. In spring 2018 he was on ITV Wales News and has been interviewed about his charity work on Welsh Radio and TV.