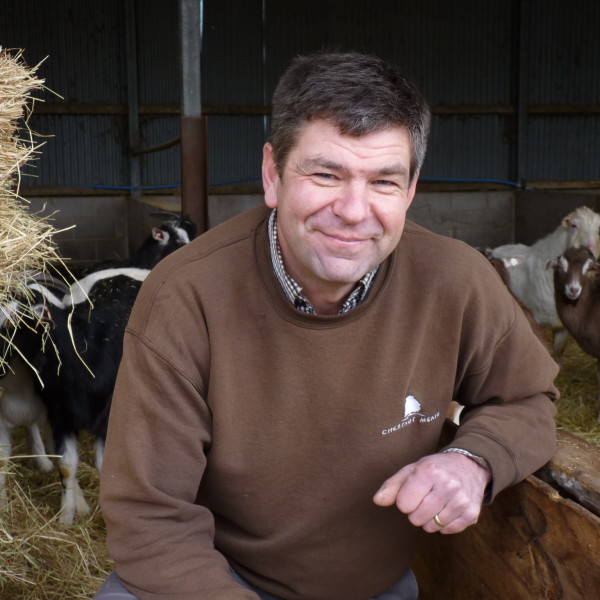 GOATS, CHESHIRE: Tim’s family have been tenant farmers on 100 acres (40 hectares) in the middle of the Cheshire Plain since 1968. They were originally dairy farmers and used to milk 140 cows. Cheshire is a big dairy-producing county.

Around the time Tim took over the business in 2000, their little farm was already surrounded by expanding neighbouring herds, some with as many as 3,000 cows. Tim and his wife Marnie found themselves being squeezed out of the dairy industry. They had a clear choice – get big or go niche.

They chose niche and developed a specialist goat meat business, selling meat over the internet and recently opened an on-site butchery and cafe. They also butcher and pack meat for other farmers, helping add value to businesses which would not otherwise be able to sell direct to the consumer.

It’s a unique business model. Tim buys goats from 25 farms around the country – including male kids bred from dairy herds and milking goats which have come to the end of their productive life. He brings them back to his farm, fattens them up for a few weeks, takes them to the abattoir himself, butchers the carcasses on-site and sells the meat direct to customers.

Goat meat isn’t widely consumed in the UK and rarely stocked in the supermarkets. Tim’s on a mission to change this by promoting the health benefits (goat is lower in saturated fat than beef and lamb), giving out free recipes and instructions on how to cook it. He’s also tapped into a growing market among the UK’s African, Indian and Caribbean communities, who often prefer goat to lamb.

Tim and his wife Marnie have three young children and enjoy escaping to their holiday home in Germany – something they can do more since giving up the milking shifts!

Tim saw Just Farmers as an opportunity to put across a small farmer’s point of view, which he thinks can get lost in the mix. He believes small family farms can be viable in a changing world, so long as they adapt and aren’t afraid of change. Tim’s small farm is surrounded by large scale, intensive dairy units and he feels their experience proves there’s room for both.

Tim didn’t just diversify his farm – he changed the whole business model in order to survive. It was a difficult decision to sell the dairy herd and took him a full 12 months of procrastinating to finally let the cows go. He says: “I am from a family of dairy farmers and that’s all I ever wanted to do. To stand there and say, ‘Actually no, we’re going to do something different’ was awful. We did it because we already had something else to go into – we’d already set up the goat business. We knew what we were trying to do.”

It’s been 11 years since the cows went and Tim and Marnie have built a thriving business.

Kill It, Cook It, Eat It (BBC Three), On Your Farm (BBC Radio 4), Countryfile (BBC One), BBC News. Farmers Guardian as a finalist in the Made in Britain Awards.