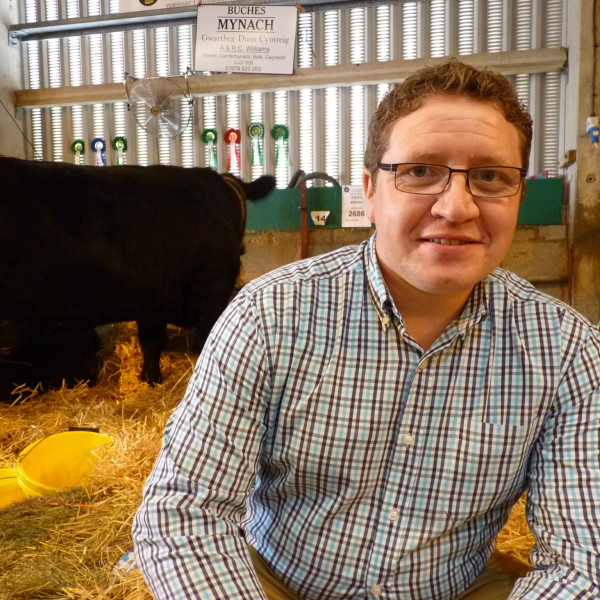 BEEF, WEST WALES: Hefin is the fourth generation of his family to farm in the valleys of Carmarthenshire, sharing a boundary with the National Botanic Garden of Wales. He farms 115 acres (47 hectares), including some rented ground, in partnership with his parents.

Before coming home to farm, Hefin had a full-time career as a translator/interpreter. It was a breakdown in his father’s health which forced him to make a decision – stick with his job and let the farm go, or try and juggle farming with another career? He decided to go self-employed, running his own freelance translation business alongside a herd of cattle. It’s not without its challenges. Hefin sometimes feels judged within the industry for being ‘part-time’ and ‘not a proper farmer’. He is passionate about changing this attitude, because he believes many people will be farming with a second income post-Brexit.

Hefin’s family used to run a mixed dairy and beef farm but it has been purely beef, known as a suckler herd, since 2009. Hefin’s cows are native Welsh Blacks, and he uses a Charolais bull to produce a continental crossbred calf. This combination gives him the best of both worlds – a hardy cow with lots of milk, able to rear a larger calf, combined with the superior growth rate of the Charolais.

Hefin’s cows calve (give birth) in spring and autumn. He aims to wean the calves at 10 months old, and they are usually sold for meat at 12 to 15 months old; either at local livestock markets or directly off farm, straight to the abattoir.

Their main diet is grass and silage but Hefin introduces the calves to ‘creep feed’ during the late summer months. This is a concentrated grain mix in a special feeder which only the calves can access. It is a supplement, not a replacement, for a grass-based diet.

Before a career-ending injury, Hefin was a keen rugby player, and enjoyed weight training and squash. He’s a Grade 8 trumpeter, plays pool for the local pub team and has a keen interest in current affairs. He was heavily involved in the Young Farmers movement, representing his club, county and country in public speaking and debating competitions, in both Welsh and English.

Hefin has two jobs. As well as running the family farm, he is an English/Welsh translator and travels all over Wales translating at public events, conferences, legal and council meetings and even court cases.

Member of the National Farmers Union (NFU) and the NFU Next Generation Policy Forum (non-official position). Independent member of his local community council.

Radio Cymru’s Post Cyntaf/ Post Prynhawn (discussing lack of opportunities for young people in farming, interviewed as part of a panel in response to Brexit post referendum, most recently a telephone interview about shortage of fodder during the late spring of 2018)