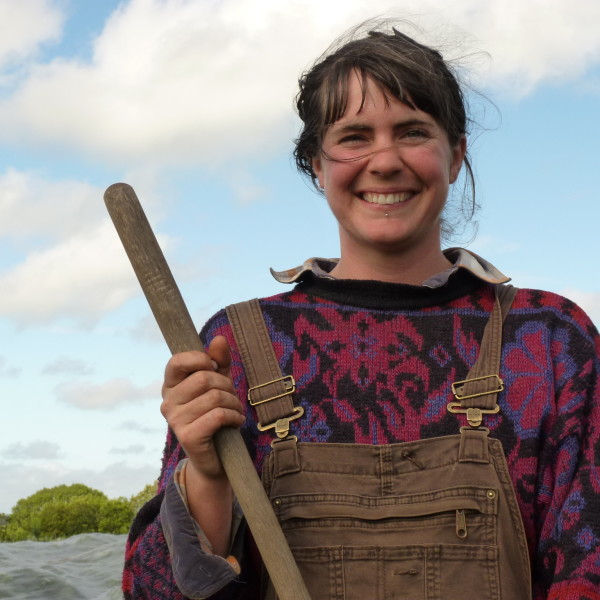 She is a first-generation farmer and runs the business with her partner Henry. They have been farming together for three years, renting a patch of land within a 90 acre (36 hectare) organic farm belonging to Henry’s family.

The couple grow a wide range of vegetables (more than 50) including mixed leaf salad, heirloom tomatoes, summer favourites such as beans, courgettes, peas, cucumbers, and a variety of staples including beetroot, parsnips, carrots and onions. They practise a no-dig farming system, which shares the principles of zero-till (i.e. no ploughing or soil disturbance). Olivia removes weeds by light hand-hoeing, which does not invert, or turn, the soil at all.

Their top priority is to build soil health in order to produce healthy plants that yield abundant and nutritious vegetable crops. They don’t use machinery and do everything using hand tools.

Due to their intensive and meticulous management, Olivia and Henry produce a lot of veg on a very small area of land. Last season, in 2018, they sold approximately seven tonnes of vegetables which is equivalent to approximately £30,000 retail value. All from 2,500 square metres of land.

All the vegetables are sold to customers within 30 miles of the farm, either direct or through farmers’ markets and a small veg box scheme. They also supply local shops, cafés and restaurants.

Olivia and Henry want to build a strong connection between the farm and the community, helping local people learn how vegetables are grown and providing them with healthy food grown on their doorstep. They are building a timbered barn as an event space where they can host farm tours, community events and pop-up food evenings. They dream of inviting their community on to the farm to socialise and eat great food.

After completing a degree in English literature and a Masters in environmental politics and economics, Olivia moved to London and started volunteering at a city farm. It was here that she learnt the basic growing skills and got her first qualification in Horticulture.

She moved on to work in waste management at the food waste charity FareShare and later at King’s College London. Olivia always knew London wasn’t the place for her so quit her job in 2014 and embarked on a global tour to learn how to farm. She spent a year volunteering on British vegetable farms and another year in Australia working on large-scale fruit farms and small-scale farms on marginal land.

On returning to the UK in 2016 Olivia and Henry decided the time was right to move back to his family farm and give it a shot themselves.

Liv enjoys surfing, music and yoga and is passionate about health and nutrition.

Member of the Landworkers’ Alliance and Organic Growers Alliance.

Since joining Just Farmers: BBC Spotlight South West (December 2019) about being a part of a short documentary project in North Devon.