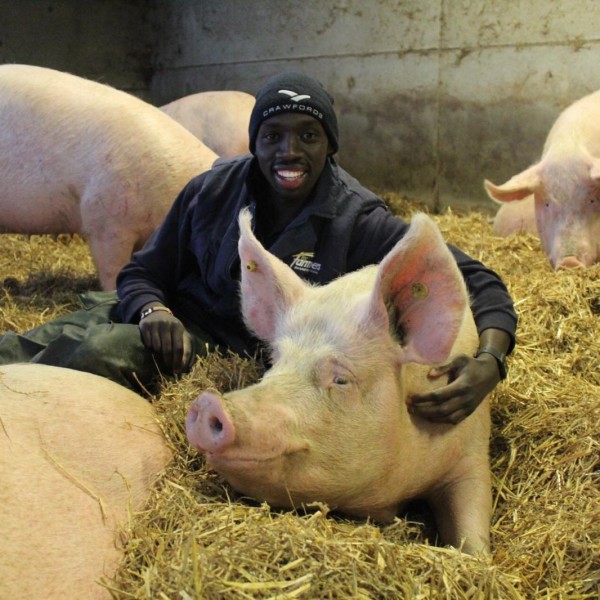 The farm currently buys in replacement gilts (young female pigs) but is now also starting to breed its own. The sows are grouped to batch farrow (give birth) every two weeks. The piglets are then weaned at four weeks old and reared until they are around five months old, when they are sent off to enter the food chain.

The sows are housed in straw yards for most of their lives but go into farrowing (birthing) crates for four weeks during lactation (milking). This is to prevent the sow from lying on her piglets while they are young.

Flavian came into farming almost by accident. Having moved to the UK at 15 from Kenya, he planned to go to university to study veterinary medicine, but after not achieving the grades required, he took a year out after his A-Levels to work before heading off to study a degree in Animal Management. After completing a week’s placement on a farm, he was offered a job there and ended up working there for his gap year. He hasn’t looked back since.

He takes enormous job satisfaction from looking after animals. For him, seeing an animal born and following it through to sale is a feeling that never gets old. This, alongside working outdoors, the lifestyle and access to locally produced, traceable, fresh meat are his favourite things about farming.

Through social media Flavian hopes to share his real farming experiences with members of the public.

Featured in articles for Farmers Weekly, Pig World, Farmers Guardian, Mid Sussex Times. Has been on BBC Radio 4, BBC Radio Berkshire, Farmers Weekly podcast, Flat White Chats podcast and was on the Peter Crouch: Save Our Summer TV show. He has also taken over Instagram accounts for the Yellow Wellies Foundation and Agri App to show a day on a pig farm.