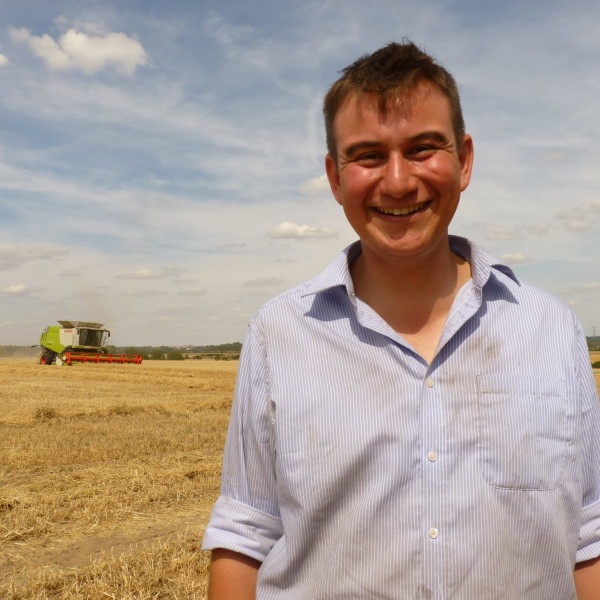 The farm is zero-till, which means the fields are never ploughed and the soil never disturbed. This is increasingly common on arable farms; the aim being to improve soil health and store carbon in the ground.

George does not use any insecticides on his crops and has significantly reduced his use of fungicides and fertilisers. While he continues to use glyphosate, he is working towards a rotation that would keep most of the benefits of zero-tillage, whilst drastically reducing and or possibly even eliminating the requirement for glyphosate.

He's also on a mission to build the farm's ecology; currently working to secure funding to establish a “rewilded seam”, which would link every field on the home farm. This can be seen as a motorway for wildlife to traverse, with field hedgerows as further tributaries off the seam to allow nature as much access to the fields as possible.

George buys store cattle to graze a further 150 acres (61 hectares). He recently planted a ‘herbal ley’ (a mixture of herbs, grasses and clovers for livestock to forage on). If the cattle fatten well on it, he would like to set up his own dedicated beef herd.

He also trialled sheep last autumn for the first time in more than 50 years on the farm. Reintroducing livestock to arable areas, which have only grown crops for many years, is a massive cultural shift in agriculture and still very unusual. Gradually more farmers, particularly the younger generation, are taking the plunge; believing it promotes soil health, works as part of their crop rotation and improves crop yields.

With the aim of educating the wider community about food and farming, George has a YouTube Channel, as well as a blog (published in the local Parish magazine as well as online), and is very active on Instagram with his handle @FarmingGeorge.

George did not want to be a farmer until he was 27. Before that he worked in London in oil trading. The stress and long hours in the aftermath of the 2008 financial crisis made him reconsider what he was doing in life, so he came home to farm. In his London days, George was a semi-professional musician playing clarinet and saxophone. He has also dabbled in filmmaking.

BBC Radio One (talking about the drought in 2017), First Dates Hotel (Series 3)