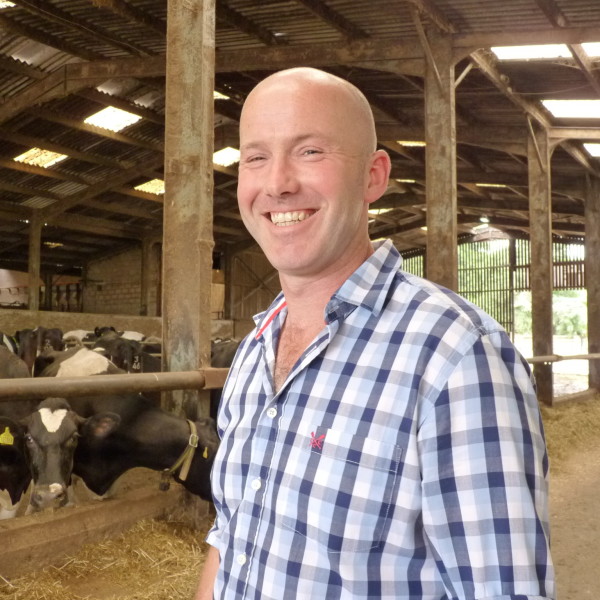 All calves are kept on the farm, including bull calves. Males are reared for meat and taken through to slaughter, while female replacements join the milking herd.

The cows are kept indoors all year round and are fed a diet of maize and grass silage, along with specially bought-in 'straights'. These are individual feed ingredients such as soya, which are mixed into the feed ration.

In housed systems, cows need something dry and comfortable to lie on, such as sawdust or sand. Charles has invested in a machine which converts slurry (cow muck, urine and waste water) into dry, odourless bedding. As well as reducing costs and recycling waste, he has noticed an improvement in cow health since introducing the system. Charles believes the live ‘good’ bacteria in the dried manure cancels out ‘bad’ bacteria in the environment; in the same way probiotic yoghurts are supposed to benefit our gut health. Does the science back up Charles’ theory? Certainly something to look at.

Charles is married to a primary school teacher, Linda, and has become very interested in education. He believes the farming industry needs to step out of its 'bubble' and do more to bridge what he sees as a knowledge gap between the producer and the consumer. That means farmers talking to schoolchildren and the general public about the job of farming and why, according to Charles, "British produce is the best in the world".

Charles ran his first marathon in 2016 and completed his first triathlon in 2018, despite not being able to swim six months before he signed up for it. He volunteers for the local agricultural society and judges farms and crops in local competitions. He enjoys spending as much time as possible with his two children, aged 9 and 10.