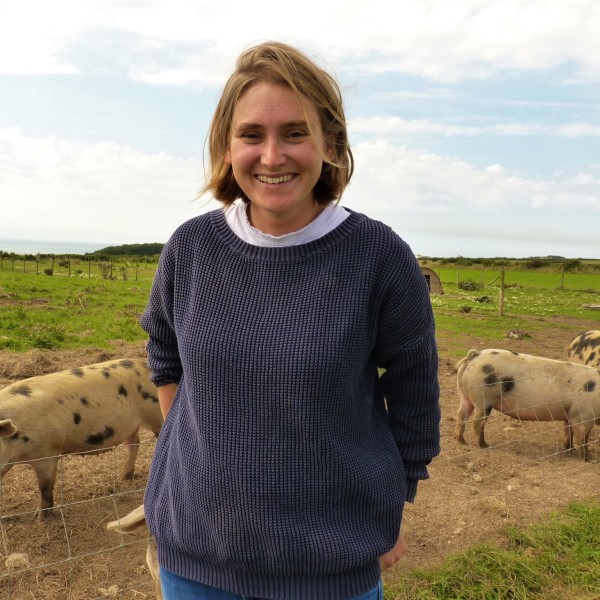 ORGANIC MIXED FARM, SOUTH WALES: Polly lives and works full-time on her family-run, organic, mixed tenanted farm - 741 acres (300 hectares) on the Glamorgan Heritage Coast. She runs a flock of 500 ewes, 55 beef cows (known as sucklers), 35 outdoor pigs and around 210 acres (85 hectares) of organic arable crops. These include spring sown wheat, winter and spring oats, barley and beans - all grown in rotation around the farm.

Interestingly, during the 20th Century the amount of arable land across Wales reduced by 75% with many of the fields being converted to permanent pasture. Nature charity Plantlife states that “arable plants” (more commonly known as weeds to many farmers!) are the most critically threatened group of wild plants in the UK.

Rather than ‘buying in’ forage or cereals to feed to the livestock, Polly grows her own. The cattle, pigs and sheep eat a fully homegrown diet. The livestock are fed with a mixture of home grown wheat, beans and oats. This reduces the farm’s carbon footprint and creates a patchwork of habitats across the farm.

Arable land for cereal production and pasture for grazing livestock attract different wildlife species and it’s this diversity Polly is aiming for. Her goal is to improve farmland bird populations while producing quality meat and organic cereals.

There is an on-farm butchery and shop, supplying the local community with award-winning meat from animals which have been born and raised on the farm, including dry-hung beef, lamb, pork and mutton joints. Every month Polly and her family deliver meat boxes around the Vale of Glamorgan and Cardiff, they also sell seasonal vegetables six months of the year.

The organic oats, milling wheat are sold direct to a number of customers including a couple of Welsh stone mills, which produce organic Welsh bread flour. They also sell their own flour that has been milled in all three Welsh mills.

Polly lived in London for a few years but came home at the age of 29. She started farming full-time when she was eight months pregnant with her first child.

Polly does pilates - but not very well.

The farm is a member of Farmers Union of Wales and Tenant Farmers Association.

Polly is on the steering group of the Welsh Nature Friendly Farmers Network and is on the inspire programme for the Oxford Farming Conference (OFC) 2021.

Featured in a short film for the Welsh Environmental Link (2019)