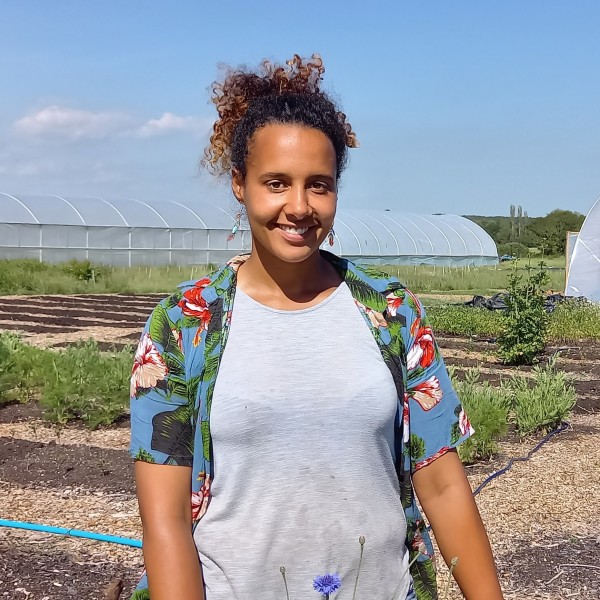 HORTICULTURE, EAST SUSSEX: Sinead runs her horticultural business on 4.5 acres (1.8ha) of land on a rent-to-buy scheme through the Ecological Land Co-op. Her team grows edible flowers and unusual greens – mainly targeted at restaurants and local veg box schemes – and in response to Covid-19 started up a postal service for the edible flowers.

The smallholding is situated on former arable land which was used to grow maize for 30 years before being left fallow (uncropped) for a few years and then allocated to create a market garden.

Sinead balances productivity and the preservation of natural resources using agroecological practices, including opening up productive land with complementary planting of 4,000 trees in the first year. The farm has also only ever used no-dig techniques as part of efforts to rebuild soil health.

Farming has taught Sinead more about wildlife, which is one of the things she most enjoys about the job. Growing up in the city, the full extent of her engagement with nature was being outdoors. But now she feels fully engaged with the farming life.

She is particularly pleased that in response to her farming techniques and tree planting she has seen the return of wildlife to the farm.

But there are a multitude of challenges and what she least enjoys is the administration and marketing, as well as the more serious issue of a forced racial narrative by the media. “I’d like to reclaim my narrative after spending the last half of 2020 of being one of the few faces of ‘black’ farming, unwillingly,” she says. “It’s been quite harrowing having attention come our way not for what we do, but because of how I look, and I really want to move away from that.”

Sinead believes that food and farming debates are becoming more polarised and disrespectful, with too much attack from both sides of an argument. This is not productive and she would like to see more focus on what is actually going on; believing more joy, education and awareness about the industry will bring a more positive narrative to farming.

Her deep connection to the land and industry issues are strongly influenced by her own background. Starting off with a degree in environmental geology and a deeply held fascination with the earth’s natural resources, she joined the mining industry.

A year later she took redundancy and, sparked by an interest in environmental issues and food waste, she went on to work in different sustainable food areas, before deciding that the best way to make change was to start from the ground. In 2016 she started volunteering at a social enterprise allotment growing food for restaurants in London, and in 2017 took over the plot with her partner Adam.

Away from the holding Sinead enjoys walking the South Downs and photography. She is also a dab hand at hula hooping and has previously performed at festivals.

Wildlife loss and mental health are two key issues for Sinead. She has pursued an active role in finding solutions to wildlife depletion and is passionate about sharing the role of wildlife on-farm and in the wider world, highlighting small things everyone can do to help.

And with agriculture having one of the highest industry suicide rates, she feels that awareness of mental health issues and how people get to dark places in the first place is a vital part of helping drive positive change. Believing that recent demonisation of farming and polarising narratives are taking a toll, Sinead wants to see compassion brought back into the conversation.