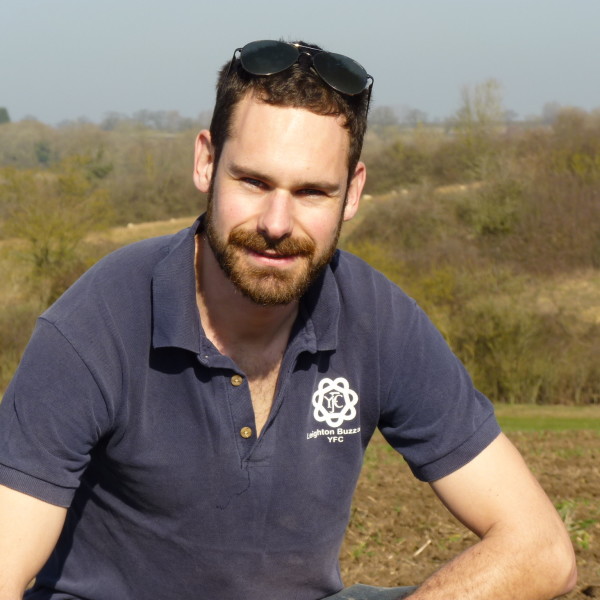 ARABLE & BEEF, BUCKINGHAMSHIRE: Richard farms on the outskirts of Milton Keynes, about 40 minutes on the train from central London. He is a 4th generation farmer and runs the farm with his Dad, John, and Uncle, Brian.

It is a mixed family farm with 700 acres (283 hectares) of arable crops (wheat, barley, oilseed rape and oats) and 300 acres (121 hectares) of grassland, mainly for fattening store cattle. These are young animals, at least 12 months old, bought from a local livestock market, or from neighbours. Richard and his uncle feed them up to slaughter weight on home-grown grass and barley.

Richard and his Mum, Ann, also run a small flock of Lleyn, Texel and Jacob sheep and sell lamb and beef boxes direct to the surrounding villages, and to the local butcher.

The family farm is on the edge of Milton Keynes, which is expanding rapidly, and falls within the Oxford-Cambridge Arc; an area of central England ear-marked for massive development. This presents both challenges and opportunities for Richard and his family. On the one hand they could lose productive fields to roads and building developments and fly tipping, trespassing and theft could get worse. On the other hand, the revenue created from any sale could help fix the farm’s succession issues and secure its future for another generation.

Richard has a particular interest in environmental management and improving soil health. He has introduced a rotational ploughing and minimum-tillage system, with ambitions to go zero-till in the future. This means growing crops without any cultivation or soil disturbance and would be quite a change for this family farm, which has relied heavily on the plough in the past. Zero-till, or no-till, is increasingly popular on arable farms; the aim being to improve soil structure and store carbon in the ground.

The farm is in mid-tier Countryside Stewardship with field margins and buffer strips, which provide food and habitat for wildlife whilst buffering watercourses from chemical inputs. Richard also plants ‘legume leys’ – this is a mixture of grasses, clovers and wild flowers. They naturally add fertility to the soil, break the cycle of arable weeds, improve the structure of the soil and provide food for bees.

Richard has always known that farming is his calling. After school he studied Agriculture at Harper Adams University and did his placement year on an organic farm in Berkshire. After university he went to work on farms in Australia and New Zealand. He is now employed full-time on the family farm.

Richard aims to complete a Tough Mudder-style obstacle race with friends every year and goes indoor rock climbing when time allows. He cooks, bakes and loves photography, capturing beautiful images around the farm and posting them on social media.