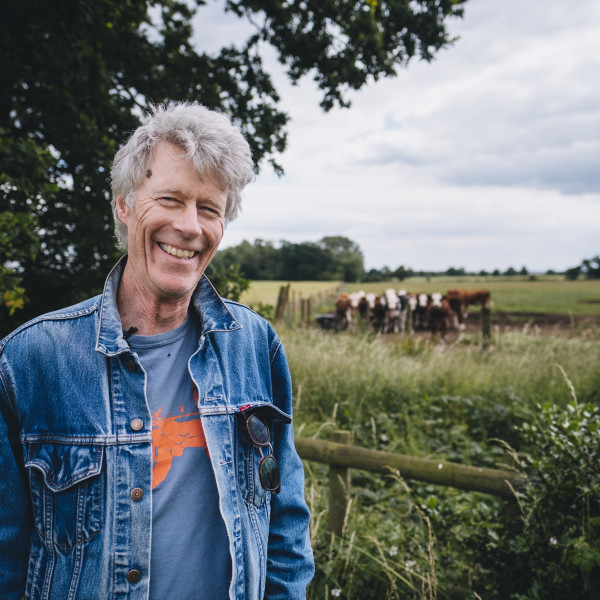 BEEF (ORGANIC), CORNWALL: Ben farms 160 acres of organic pasture, with a further 90 acres of woodland and wilderness gardens. He grazes the fields with a herd of 120 cross-bred dairy cows and young stock. They are 100% grass-fed, have been for the last 25 years, and give birth to their calves in the spring.

Ben was bred on the farm but started his own working life in London as a journalist in the motorcycle and trucking press. He returned to the family farm in 1989 to take over from his elderly parents and start a family of his own.

He changed the management of the dairy herd; moving from a “high-input, high-output high-stress” intensive system, to a low cost, totally grass-fed approach – which also turned out to be more profitable and resilient.

The herd used to produce milk for Ben’s own cheese dairy on the farm, which he ran in partnership with his wife. He decided to stop milking a few years ago and wind down towards retirement, transitioning the dairy herd into a less labour-intensive beef herd.

The main focus of Ben’s farming activities these days is regenerating soil health and building soil carbon. He pursues an alternative agricultural model to the conventional farming system. This means he no longer uses any chemicals (pesticides, herbicides, fungicides, wormers, antibiotics, vaccines) or synthetic fertilisers; and farms without disturbing the soil (this method of not cultivating or ploughing the land is often referred to as ‘zero till’).

Ben mob grazes his cattle (where they graze the pasture one bit at a time, rotating around the farm and allowing the grass to regrow). Managed correctly, the herd has the potential be a self-replicating implement that harvests, manures and sows seed in a virtuous solarpowered circle, with little requirement for depreciating machinery.

The fields feature diverse plant mixtures of grasses and herbs (known as a ‘herbal ley’) and Ben uses compost teas (liquid microbial broths extracted from organic compost) to stimulate beneficial microbial life and diversity in the soil; just like the human gut, the soil needs a healthy micro biome to thrive.

After 30 years of being a ‘contrary farmer’ he has come to realise the only truly sustainable method of growing food is to emulate and encourage nature’s best practices. This involves maximising the capture and conversion of sunlight and atmospheric carbon dioxide into plant carbohydrate (sugars) via photosynthesis. This energy transfer then fuels the soil food web and, managed carefully, enables a carbon residue to be locked away in the soil as a bonus.

Ben believes the potential for this method of low impact farming to sequester carbon dioxide is immense. It is starting to be taken seriously as a possible means of reducing global warming. In addition, re-building soil carbon enables greater rainwater holding capacity, mitigating the drought and flooding events becoming increasingly prevalent as the climate changes.

Ben also generates income by building and renovating rental properties around the farm. After giving up milking cows, Ben has more time of his hands for writing and is planning a return to journalism and writing.

Ben has a “very curious mind” and taught himself how to farm through reading agricultural and scientific literature, setting up discussion groups to share ideas and techniques with other farmers and undertaking study tours abroad. He enjoys music, photography, cooking, motorcycle riding and renovation. He is a 2005 Nuffield Farming Scholar. The title of his published study is: ‘Improving Pasture Quality for Animal and Ultimately Human Nutrition and Health’.