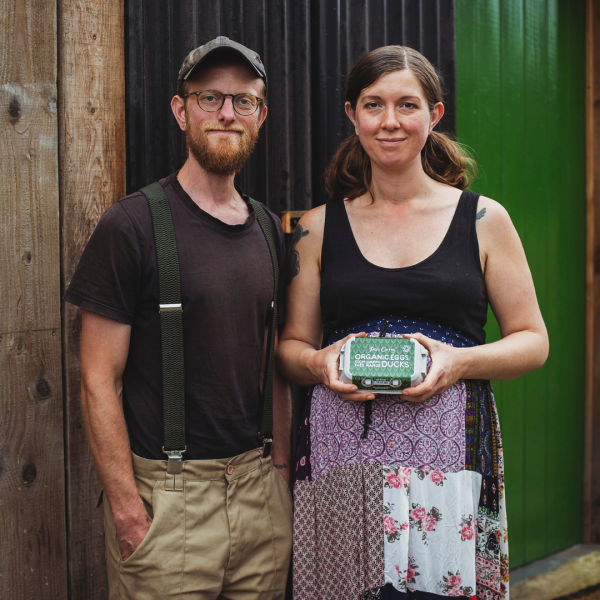 DUCKS, FRUIT, VEGETABLES, COMPOST, SHEEP. Josh and his wife Abi farm 10 acres in South Wales, with 500 free-range ducks and a small flock of 10 ewes (female sheep) alongside a small but growing market garden. They are currently the only commercial producer of organic certified duck eggs in the UK, with three breeds: Khaki Campbells, Dark Campbells and the rare Welsh Harlequin. They sell the eggs through Abel & Cole and local organic wholesalers.

The sheep are a mix of Welsh Mules, Blue Texels and Shetlands, and Josh sells the finished lambs at market – they used to sell meat directly to the public but gave that up to focus on other things.

A South African with a Scottish mother, Josh moved to London where he met Abi; she was a graphic designer and illustrator and he worked in sales and project management. But being fans of the outdoor, healthy lifestyle, in 2017 they decided to sell their London flat, quit their jobs and become farmers.

Although Josh admits that his search for the ‘good life’ was somewhat naïve, it came from the perspective of being entrepreneurial and wanting to do something more meaningful with their lives, to have a more positive impact. “Health, wellness and diet were all reasons to leave London and we wanted to be involved in producing our own meat. I thought that if I am going to eat meat I should be able to raise that animal and kill it," he says, "we were nervous about the idea of butchering our own animals, but in practice it felt very natural.”

It's been a very difficult but rewarding journey so far and the couple are well on their way to creating the farm they want. They have planted about an acre of blueberry bushes which should produce their first yield soon. They currently produce radishes and squash in their small market garden, but given how much fertility they are generating on the farm, they are starting a new business selling compost from their duck manure.

Josh and Abi use regenerative practices on the farm, designed to look after and build soil health. They have planted thousands of trees and shrubs, and rotate their livestock around different fields to give the grass and soil a rest.

Trying to make a living on 10 acres in a remote part of the country is tough, and Josh finds the stress of finances to be the worst part of farming. However, he loves the autonomy, being outside, producing food, and working with the animals.

Josh doesn’t have much time for anything off-farm but is interested in health and fitness, diet, food politics, and regenerative agriculture.

Josh finds the climate change conversation very challenging; while he appreciates there are problems he feels that meat is one of the most efficient and sustainable foods that farmers can produce in the UK because of its climate. However, he’s aware this doesn’t necessarily work in other parts of the world, with a different context.

Niche, high value farming is ideal for small-scale producers like Josh, and he appreciates that this type of production doesn’t work for everyone. That said, he is a big believer in mixed farming systems including livestock and vegetable production and feels that large-scale agriculture is going to have to change to be more sustainable and resilient, with lots of ideas out there for producers to try. He believes there is an opportunity for every farm, no matter what scale, to become more regenerative, and that our future depends on it.

Josh is also concerned that there is a huge disconnect between how people think their food is produced, and how it is actually produced. The industry is about to experience some significant disruption with the combined impact of climate change, Covid, and Brexit, and Josh feels that farmers need to be supported as much as possible. “The general public need to hear their point of view in a very crowded ‘noisy space’.”

Member of the Land Workers Alliance

Featured on ITV Wales and a YouTube film about regenerative farming.