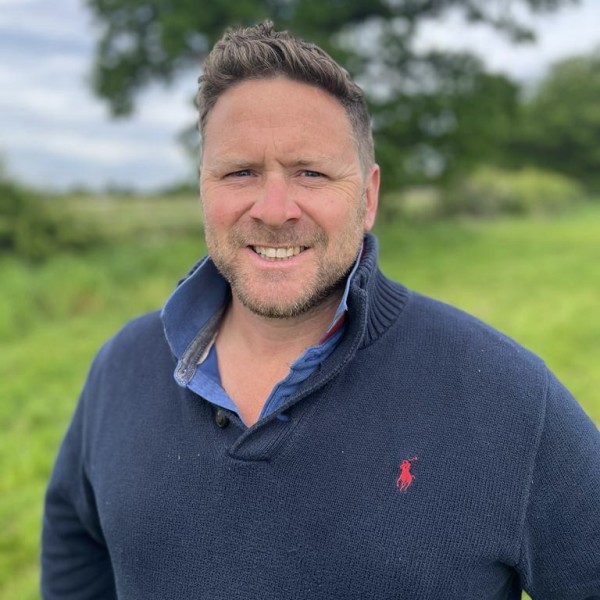 SHEEP, BEEF and PIGS, POWYS: James farms 500 acres of improved hill land in mid-Wales, where he keeps 1,000 Aberfield and Welsh ewes, 30 Salers suckler cows and 1,000 pigs. He runs a low input system, rotating the ewes around different pastures, and sells the female lambs for breeding, with the male lambs finished for meat.

He breeds from the suckler cows and sells the male calves at market for other farmers to grow on, with female calves sold for breeding. He rears over 2,000 pigs a year; they arrive as weaned piglets, which he grows on to finish as high welfare, outdoor-bred, straw-reared British Pork for high end supermarket chains.

James is interested in soil health, and is a demonstration farmer for the Welsh Government’s Farming Connect programme. He is currently hosting projects looking into soil run off in the uplands (where soil / polluted water is washed off in heavy rain) and water quality. He’s also exploring the benefits of keeping soils covered with growing crops all year, minimum tillage (where the soil is disturbed by cultivation as little as possible), boosting organic matter and carbon storage.

Despite having been born and brought up on the family farm, James is passionate about travel so has visited Australia, Kenya, Uganda, Tanzania, Zambia, Zimbabwe and South Africa. He raised funds to return to Kenya to set up small-scale agricultural projects in rural schools in 2005, and won a Hybu Cig Cymru scholarship to tour farms in New Zealand and Ireland in 2014-15.

Being located in the Welsh uplands, weather is a constant battle, as is negativity around the farming industry, says James. But he loves being his own boss and having the space and freedom to spend time with his family, teaching his three boys about the great outdoors and soil ecosystems.

He’s also keen to communicate with the public, through social media and connecting with schools via Farmertime. And he likes to pass on his knowledge, acting as a Mentor for Farming Connect.

When he’s not farming or travelling, James likes attending the theatre, writing, and reading autobiographies on famous leaders. He also owns two holiday cottages off the farm.

James is passionate about the environment and high welfare farming: He doesn’t use chemical fertilisers, disturbs the soil with machinery as little as possible, and keeps crops on the soil to prevent run-off. He has tested his farm carbon footprint and the soil contains 16+% organic matter; a figure unparalleled in most countries including the UK. He has planted 30 acres of woodland and several kilometres of wildlife corridors. Having fenced off the river and created wildlife ponds he has seen wildlife return to all areas of the farm.

“One of the best things about farming is being responsible for producing primal food, the most essential item for human sustenance,” says James. “I want to communicate our positive story on soil health and environmental gains, and the whole journey we represent, from soil microbiota to grazing animals to the final nutrient dense, natural, protein-rich foods that we produce.”

NFU member and Member of the local Community Council.